How Do You Top Bacon For Life? With

That's right. Smithfield is giving away 1,000,000 slices of bacon to be shared among ten (10) lucky winners when Aric Almirola, More Info on Menu for Costco Food Court Hours in Health Score. Driver of the No. 10 Smithfield Ford Mustang repeats a win in Talladega this year! Enter now for your chance!

Enter For A Chance To Win

Thanks For Entering, And Good Luck!

Tune in to NBC at 2:00 PM ET on October 13th to show your support for Aric Almirola, Driver of the No. 10 Smithfield Ford Mustang!

Learn more about Aric Almirola on Beyond the 10

Learn more about Aric Almirola on Beyond the 10 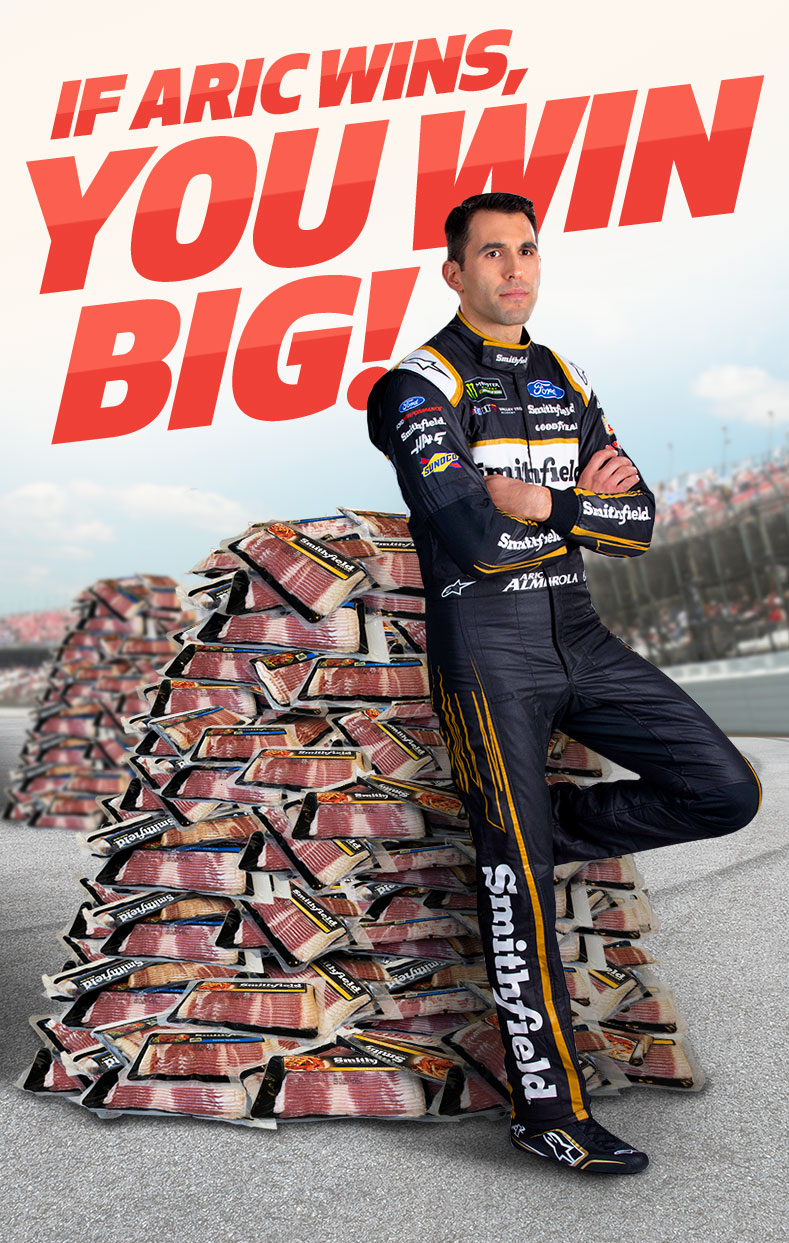 PRIZES WILL ONLY BE DISTRIBUTED IF the Smithfield-sponsored Stewart-Haas No. 10 Racing Team records an official FIRST PLACE FINISH in the 2019 1000Bulbs.com 500 stock car race at Talladega Superspeedway (the “Race”) scheduled for Sunday, October 13, 2019 (or on its official reschedule date)

NO PRIZES WILL BE AWARDED IF THE SMITHFIELD-SPONSORED STEWART-HAAS NO. 10 RACING TEAM DOES NOT WIN THE RACE.

1. Eligibility: Smithfield Racin’ for Bacon 1 Million Slice Giveaway (the “Sweepstakes”) is open to legal residents of the fifty (50) United States and the District of Columbia and who are at least eighteen (18) years old at the time of entry (19+ in Alabama and Nebraska). The Sweepstakes is subject to all applicable federal, state, and local laws and regulations and is void where prohibited. Employees, officers and directors of Sponsor, Administrator, and/or any company involved with the design, production, execution or distribution of the Sweepstakes, and their respective parent companies, subsidiaries, and affiliates, and members of their immediate families (spouses and parents, children and siblings and their spouses), and/or those living in the same household of such individual, are not eligible to participate. Participation constitutes entrant’s full and unconditional agreement to these Official Rules and Sponsor’s and Administrator’s decisions, which are final and binding in all matters related to the Sweepstakes. Winning a prize is contingent upon fulfilling all requirements set forth herein.

3. Timing: The Sweepstakes begins on Monday, September 9, 2019 at 12:00 a.m. Eastern Time (“ET”) and ends at 11:59 p.m. on the evening of the Race, Sunday, October 13, 2019 (the “Promotion Period”). Entry will remain open until the evening of the actual Race if the scheduled Race date changes for any reason (e.g. inclement weather or any other act of nature). Regardless of reschedule dates, the sweepstakes will end no later than Sunday, October 20, 2019 at 11:59 p.m. Administrator’s computer is the official time-keeping device for the Sweepstakes.

4. How to Enter: During the Promotion Period, a sweepstakes entry (each an “Entry” or “Entries”) can be obtained by visiting www.racinforbacongiveaway.com and following the on-screen instructions to enter. Entrants may receive a maximum of one (1) entry during the promotion period.

5. Drawings: Administrator’s decisions as to the administration and operation of the Sweepstakes and the selection of the potential winners are final and binding in all matters related to the Sweepstakes. Administrator will randomly select the potential Sweepstakes winners from all eligible Entries received during the Promotion Period, within 5 business days of the actual conclusion date of the race. Drawing is to occur no later than Friday, October 25, 2019. All potential winners will be notified by email. Except where prohibited, each potential winner of a prize valued at or above $600 (or parent/legal guardian if winner is a minor in his/her state of residence) will be required to sign and return an Affidavit of Eligibility & Liability Release, Publicity Release and W9 ("Declaration") and supply a digital photo of themselves for use in publicity which must be received by Administrator within seven (7) days of the date notice or attempted notice is sent, in order to claim his/her prize. If a potential winner of any prize cannot be contacted, fails to sign and return the Declaration or provide any other requested information, within the required time period (if applicable), or the prize is returned as undeliverable, the potential winner forfeits his/her prize. Receiving a prize is contingent upon compliance with these Official Rules. In the event that a potential winner is disqualified for any reason, Sponsor will award the applicable prize to an alternate winner by random drawing from among all remaining eligible Entries. Only one (1) alternate drawing will be held, after which the prize(s) will remain un-awarded. Prizes will be fulfilled within approximately 6 - 8 weeks after the conclusion of the Sweepstakes.

6. Prizes/Odds: IF the Smithfield-sponsored Stewart-Haas No. 10 Racing Team records an official FIRST PLACE FINISH in the 2019 1000Bulbs.com 500 stock car race at Talladega Superspeedway scheduled for Sunday, October 13, 2019 (or on its official reschedule date); TEN (10) valid Entries will be selected at random and contacted as potential Sweepstakes Grand Prize Winners.

There is a limit of one (1) prize per person and/or household. Sponsor reserves the right to substitute any listed prize for one of equal or greater value for any reason. All taxes on prize(s) won are the sole responsibility of the prize winner. If the prizes are to be awarded upon the first place finish of the Stewart-Haas No. 10 racing team in the Race, the odds of winning the drawing depend on the number of eligible Entries received.

All prize details will be determined by Sponsor in its sole discretion. Prizes are non-transferable and no substitution will be made except as provided herein at the Sponsor’s sole discretion. Prizes cannot be copied, redistributed, resold, auctioned, bartered, assigned, exchanged, placed in commerce, transferred, or otherwise conveyed. Any attempt to transfer, sell or otherwise tamper with the authorized use of the prize may result in action taken by Sponsor in its sole discretion, which may include, without limitation, voiding any remaining prize or prize value. Sponsor reserves the right to substitute a prize for one of equal or greater value if the designated prize should become unavailable for any reason. Winners are responsible for all taxes and fees associated with prize receipt and/or use.

7. Release: By receipt of any prize, winner agrees to release and hold harmless Sponsor, Administrator, and their respective subsidiaries, affiliates, suppliers, distributors, advertising/promotion agencies, and prize suppliers, and each of their respective parent companies and each such company’s officers, directors, employees and agents (collectively, the “Released Parties”) from and against any claim or cause of action, including, but not limited to, personal injury, death, or damage to or loss of property, arising out of participation in the Sweepstakes or receipt or use or misuse of any prize and for claims based on publicity rights and intellectual property rights, defamation or invasion of privacy.

8. Publicity: Except where prohibited, participation in the Sweepstakes constitutes winner’s consent to Sponsor’s and its agents’ use of winner’s name, likeness, photograph, voice, opinions and/or hometown and state for promotional purposes in any media, worldwide, without further payment or consideration.

9. General Conditions: Sponsor reserves the right to cancel, suspend and/or modify the Sweepstakes, or any part of it, if any technical failures, computer glitches, fraud, human error or any other factor impairs the integrity or proper functioning of the Sweepstakes, as determined by Sponsor in its sole discretion. In such event, Sponsor, in its sole discretion, may elect to hold a random drawing from among all eligible entries received up to the date of discontinuance for any or all of the prizes offered herein. Sponsor reserves the right, in its sole discretion, to disqualify any individual it finds to be tampering with the entry process or the operation of the Sweepstakes or to be acting in violation of the Official Rules of this or any other promotion or in an unsportsmanlike or disruptive manner. Any attempt by any person to deliberately undermine the legitimate operation of the Sweepstakes may be a violation of criminal and civil law, and, should such an attempt be made, Sponsor reserves the right to seek damages from any such person to the fullest extent permitted by law. Sponsor’s failure to enforce any term of these Official Rules shall not constitute a waiver of that provision.

10. Limitations of Liability: The Released Parties are not responsible for: (1) any incorrect or inaccurate information, whether caused by entrants, printing errors or by any of the equipment or programming associated with or utilized in the Sweepstakes; (2) technical failures of any kind, including, but not limited to malfunctions, interruptions, or disconnections in phone lines or network hardware or software; (3) unauthorized human intervention in any part of the entry process or the Sweepstakes; (4) technical or human error which may occur in the administration of the Sweepstakes or the processing of entries; or (5) any injury or damage to persons or property which may be caused, directly or indirectly, in whole or in part, from entrant’s participation in the Sweepstakes or receipt or use or misuse of any prize. If for any reason an entrant’s entry is confirmed to have been erroneously deleted, lost, or otherwise destroyed or corrupted, entrant’s sole remedy is another entry in the Sweepstakes, if it is possible. No more than the stated number of prizes will be awarded. In the event that production, technical, seeding, programming or any other reasons cause more than the stated number of prizes as set forth in these Official Rules to be available and/or claimed, Sponsor reserves the right to award only the stated number of prizes by a random drawing among all legitimate, un-awarded, eligible prize claims.

11. Disputes: Except where prohibited, entrant agrees that: (1) any and all disputes, claims and causes of action arising out of or connected with this Sweepstakes or any prize awarded shall be resolved individually, without resort to any form of class action, and exclusively by the State or Federal courts located in Virginia; (2) any and all claims, judgments and awards shall be limited to actual out-of-pocket costs incurred, including costs associated with entering this Sweepstakes, but in no event attorneys’ fees; and (3) under no circumstances will entrant be permitted to obtain awards for, and entrant hereby waives all rights to claim, indirect, punitive, incidental and consequential damages and any other damages, other than for actual out-of-pocket expenses, and any and all rights to have damages multiplied or otherwise increased. All issues and questions concerning the construction, validity, interpretation and enforceability of these Official Rules, or the rights and obligations of the entrant and Sponsor in connection with the Sweepstakes, shall be governed by, and construed in accordance with, the laws of the State of Virginia.

13. Winners List: For a winners list, please send a self-addressed and stamped envelope to: Smithfield Racin’ for Bacon 1 Million Slice Giveaway, Winners List c/o Doner CX, 8050 Rowan Road, Suite 200, Cranberry Twp., PA 16066. The winner list will be available and distributed after winner confirmation is complete. Request must be received within 90 days of the end of the Promotion Period.